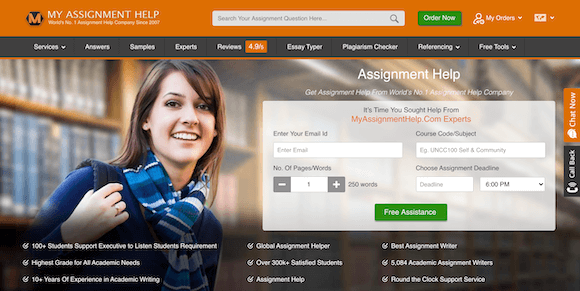 MyAssignmentHelp.com is a custom writing service that caters to students who need writing help with paper assignments like essays, dissertations, term papers, research papers, thesis, etc. They claim to have been in business since 2007, with a considerable customer base and over 4,000 academic writers.

From the website, you can see that the website is owned and operated by SolveMore Limited, a company with a registered address in Nicosia, Cyprus (although previously they claimed to be in Australia) but there are numerous signs that they're from India or Pakistan.

The pricing system of MyAssignmentHelp is extremely inconvenient, and that's an understatement. In fact, we've never encountered an essay company with a pricing system which is as awful as this one.

First of all, you'll need to register, providing your name, e-mail, and other personal information, after which you'll need to fill in the assignment submission form.

After submitting the form, you'll need to contact the so-called "assignment expert". We're uncertain whether these "experts" are bots, automatic-responses (which operate after a pre-determined pricing system which is hidden from public), or actual people, as the "chatting" we've made was way too friendly and formal at the same time. 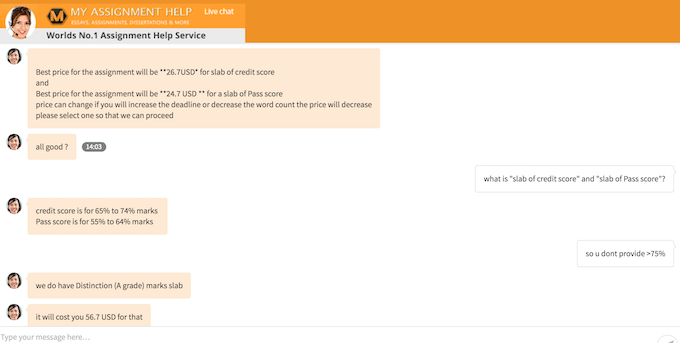 By clicking on the "order" button, you'll get a price calculator. You should fill out the empty boxes regarding the subject's name, word-count, deadline, and work level (high-school, diploma, college, and such). After filling out the formal part, proceed by defining the assignment description box, reference style, weightage, and remaining semester. 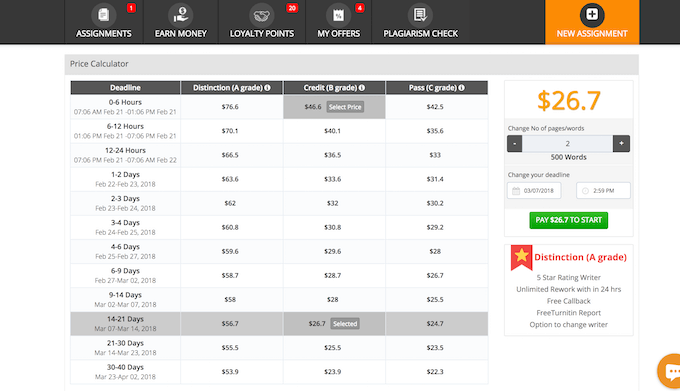 There are three writing levels – Distinction (A grade), Credit (B grade), and Pass (C grade). We don't like this one bit, as no company should charge you for a C-class paper. The only speck of light is the discount option – namely, you'll get 10% MyAssignmentHelp discount for each referred friend.

In general, compared to other services, prices were much higher. In addition, MyAssignmentHelp charlatans provide only 250 words per page that isn't fair and correct. Each page should consist of at least 275 words.

You can get your paper done in five selectable academic levels – the high school, diploma, undergraduate/college, post graduate/university, or PhD/Doctorate. This is fairly common practice, but it's worth mentioning.

The reason why the majority of students don't like this company is exactly because of the writing quality. According to MyAssignmentHelp reviews, some of the most notable comments refer to numerous (and vital) grammatical mistakes, exceptionally atrocious vocabulary, and poor overall quality.

The payment process is quite straightforward. You just have to choose the credit card type (e.g. Master card, Paypal, etc.). Another thing worth mentioning is the fact that you can benefit from "special offers".

The money back and revision policies are both stated "under the same roof".

Now, here goes the shifty part. If you happen to fail the assignment using the paper you've ordered from this company, you can get 50% back ("However, the authentic fail proof needs to be provided within one month (31 days) after assignment completion").

That's certainly inconvenient, but what surprised me is the fact that the company promises to fire the writer who did the failing assignment. That's a bit rough, given the circumstances. These are just fine-sounding words, because in fact they use this information to blackmail students (check here and here). 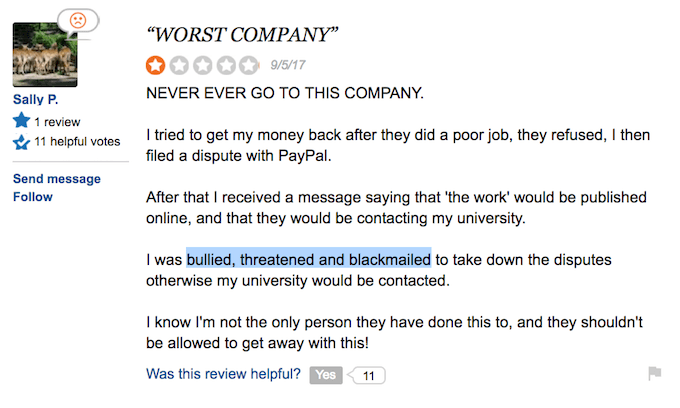 After reading all the points, you'll find that there's no such thing as regular refund policy. The only way to get your money back is if you've been charged twice. Smells like a major scam to me. Perhaps that's why so many students are looking for an answer to the question of how to sue MyAssignmentHelp.

The revision policy is plain – it states that you can change and revise your assignment within the time frame of one month, but not beyond. If a month passes, you won't be able to neither revise your article nor get a refund.

We were surprised that the first comment on one of the threads about this company was extremely positive. A certain Ayush Rawal complemented their staff for completing his assignment within the given deadline, and added that the interaction was nice. In fact, this very comment gave me the notion that this company was owned by Indians. Apart from that, there's a wall of completely red flags, 1 stars, and negative comments.

Let me assure you, I'm not a racist, but if the company needs to lie about it roots, there's something fishy, and that's putting it mildly. Now, as for the question "is MyAsiggnemntHelp reliable?", the answer is quite simple – any company that employs the use of lies to cover their tracks will lie to you if it would benefit their ends.

Even though the majority of comments were short and concise (bad, scammers, stay away, and such), we managed to dig up an extensive one which explained all the fuss. Students say MyAssignmentHelp writers are scam artists who can't speak English, the grammar is absolutely terrible, and all of the refund & revision policies are for naught. 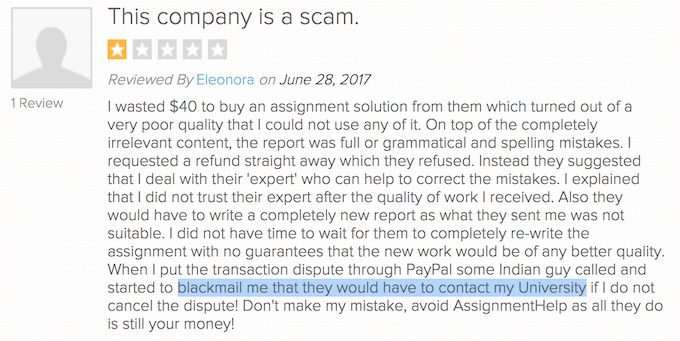 After carefully sifting through more than a hundred comments, we've concluded that there's no middle ground – the comments are either completely negative or completely positive, but there's a catch. The negative comments are nearly unified in reason and logic whereas positive comments seem urged and dictated. We encourage you to visit the following pages for more info:

All things considered, we are nearly 100% sure that this company is not legit. The comments have built up quite an online notoriety for this company, and I'm the kind of a person that believes the majority.

After reading reviews from previous customers and other third-party review sites, we’ve realized that MyAssignmentHelp is a huge fluke. To prove our point, they have way too many negative reviews on SiteJabber.

And if you’re wondering why they’re not on TrustPilot, that’s because their profile has been shut down by the site itself after receiving too many bad reviews, deeming them unfit.

But what you've read so far is just the tip of the iceberg. It's already looking bad as it is, but the fact that MyAssignmentHelp is also running a fake review site https://topassignmentreviews.com/ in order to boost their credibility will already prompt you to completely slash them off your options. In fact, besides MyAssignmentHelp, this website also has several other essay services: http://essaygator.com/, https://myassignmenthelp.co.uk/, and https://essayassignmenthelp.com.au/, all of which have positive reviews.

Too good to be true, right? How can you rely on a company that spreads fake reviews just to make them look good? It's a typical modus operandi among companies with one ulterior motive: To attract more people and fool them into spending their money for poor-quality service.

Once again, MyAssignmentHelp has proven itself to be an essay writing service that's not worth anybody's consideration. You're better off hiring a more reputable company, my friend!

UPDATE: As of August 2022, the folks at MyAssignmentHelp.com are hard at work, for all the wrong reasons. Because their reputation has constantly deteriorated over the past months, the company has resorted to aggressive marketing and are working on reputation whitewashing instead of improving the quality of their services. Case in point, the company has constantly bombarded our website with fake short positive reviews.

Is My Assignment Help Reliable?

Sad to say, it's a big NO. All these reports of My Assignment Help scam greatly affects their credibility. It's hard to overlook the tons of negative reviews they received in trusted review sites like SiteJabber.

The most common customer complaint is that most of their writers appear to be non-natives, most of whom are based in India. Many of the papers they've turned in are riddled with plagiarized, poorly constructed content. Additionally, there are many reports of customers not getting their money back even after submitting a refund request. In short, they got scammed.

Even though we rarely do this so abruptly and directly, we urge you to stay away from this scammer company. My Assignment Help reviews are extremely negative, these guys are certainly not legit, and you won't find any help with your assignment if you ever choose to go with them. We encourage you to find MyAssignmentHelp alternative, don't waste your time and money.